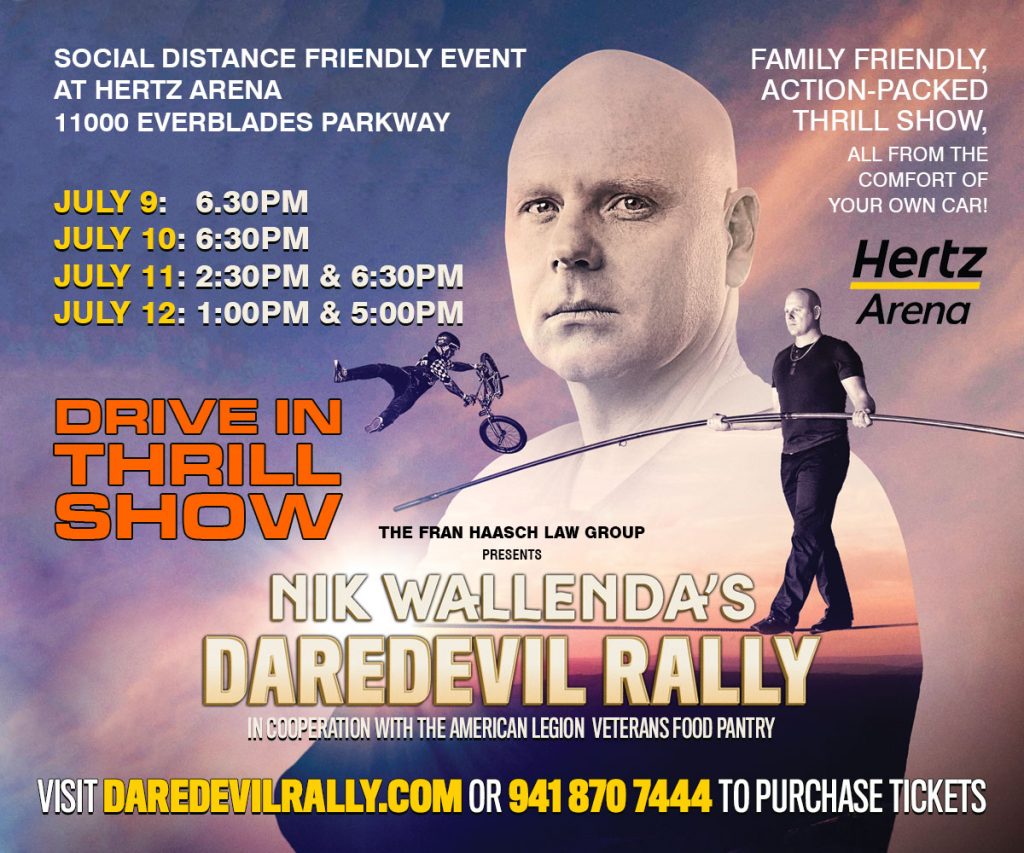 The “King of the High Wire” – Nik Wallenda – will stage a Daredevil Rally Drive-in Thrill Show at The Hertz Arena the weekends of July 9-12. Presented by the Fran Haasch Law Group,  the shows will feature Wallenda and his wife, Erendira Wallenda, as well as internationally renowned daredevil performers to include FMX freestyle jumpers, BMX riders, motorcycles in a steel globe, a wheel of steel and a human cannonball.

The FMX freestyle jumpers, as seen on the X Games, Dew Tour and Nitro Circus, are some of the top action sports athletes in the world. They defy gravity and jump their dirt bikes over 75 feet through the air ramp to ramp. “We wanted to provide quality family entertainment during what has been a tough time for our nation and the world,” said Wallenda, who is self-producing for the first time in his career. “After touring the globe, I’ve made friends with some of the greatest daredevils of our time. For this special performance, I’ve invited all of them to unite together in one place. Join us at the Hertz Arena for this spectacular event – July 9-12.

The viewing option will be similar to that of a drive-in movie – from the comfort of a vehicle. Tickets may be purchased at www.daredevilrally.com. Attendees can get $1 off their ticket price for every can of non-perishable food brought to the event (a maximum of $5 off) per car. “Quite obviously, given what’s happening with the pandemic crisis, we also want this to be a safe event. To that end, we’ll even be applying social distancing as it relates to vehicle placement in the park,” added Wallenda.

With 11 Guinness World Records and a list of never before seen death defying feats, Wallenda has performed live in every state in the USA and all over the world. He has garnered the support from tens of millions of live viewers in network television specials on ABC, The Discovery Channel and others. From crossing the Grand Canyon and Niagara Falls to walking blindfolded between two towers in Chicago, he personifies the Wallenda Family legacy of “Never Giving Up” and has time and time again proven that “Fear is a Liar.” Wallenda was “performing” on a high wire before he was born; his mother, Delilah Wallenda, was still walking the high wire while six months pregnant with him. While he began walking the wire in 1981, he was not permitted to perform professionally on a high wire until age 13. In 2001, he set his first world record in Kurashiki, Japan for the four-layer, eight-person pyramid on a high wire.